24/06/2012 Dumb Robot Pilot "Space Bug". Real life footage of an alien space ship caught red handed whilst on a reconnaissance mission. Look to the skies, they come out at night !.

2010/08/19: Well it looked like the maths was on our side after all as an email from Baz has just informed me that there has been a complete turn up for the books with Warbreck beating EVH. Apparently Norcross batted first and recovered from 20-5 to 100 all out. EVH were then all out for for around 50 ! (n.b. Baz says that all figures are somewhat approximate)

So it looks like we're going to be at finals day after all !

2010/06/12: Excitement has peaked ! In an effort to compete wioth "proper" broadcasters and their fancy technology we've invested our pocket money in a pair of video sunglasses. Yes you heard that right. It's like something we used to read about in spy books when we were kids. Given that we went for a really cheap pair (well £ 20 is reasonably cheap as the "real" ones go for a few hundred - ed.) we weren't expecting super quality but the footage is usable.

In fact the only real problem with them is that, as herr Ramjet is wearing them, you get to hear his dribbling idiocy ! But here are the first results of our newly dubbed "Oaf Cam" (tm) which you can now see courtesy of You Tube:


2010/06/12: Well if you;re wondering where Baz is at the moment he's over in South Africa at the world cup with "our" Nobby (a.k.a Graham Cookson) whose twitter feed can be found here http://twitter.com/realfootballfan.

And yes I do realise that this news has been posted somewhat late. But there are seemingly hundreds of things to do in a typical week and sometimes I forget. Soz :).

2010/04/10: Sadly it's more bad news for the Jollys as news has reached us that Will Thistle thwaite has badly dislocated his shoulder whilst playing for Great Ecclestone in their twenty twenty game. We all wish him a speedy recovery.

2010/04/10: Sadly the pre season has not been kind to us this year as star Jollys all rounder Tony Foley had a horrific accident in Rotterdam when he slipped on a patch of ice. The next thing he knew he'd woke up in hospital with his head screwed into in a metal halo, a large gash in his forehead and a broken neck. Thankfully he's still with us but the bad news is that he's not yet fully regained the use of his left arm or left leg. However there is movement in both so we can only hope that he continues to improve.

But family Foley did have some good news as Laura has just given birth to their second son so our thoughts go out to Tony, Laura, Daniel and the latest arrival (name unknown at the time of writing -ed.)

Still as you can see from this picture of us out with him watching Great Ecclestone at Stanley Park he's still a Jolly as despite being temporarily inconvenienced he can still hold a pint. 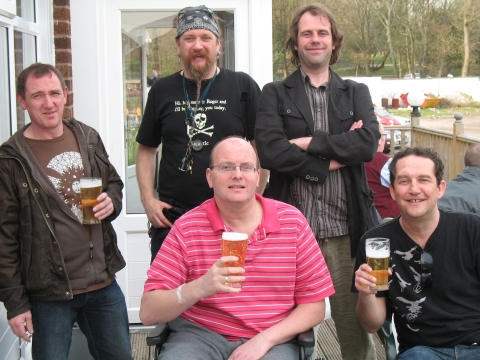 2010/02/11: Well amongst other things your humble scribe plays, and has played over the years, in several local bands. Recently the drummer of one such band ("King Mob Echo") decided he wanted to make a video for one of our old tracks. So each of us got one (very) quick go at miming after which he added some stock footage and some dancing girls (so there's a small chance the cricketing fraternity will at least give it a casual glance). Anyway a quick spot of editing later and you can now see the results of his efforts on YouTube.

2010/02/05: The Jollyboys are going to Mars !. We mght not be the best team in the world (or the local league for that matter - ed.) but I bet we're the first cricket club from the Fylde area to get to Mars. And if you'd like to get in on the action you're going to have to visit the NASA site and participate. Of course this is all part of our plan to get an alien spin bowler for next season (just think what sort of spin a chap with tentacles could produce - ed.) 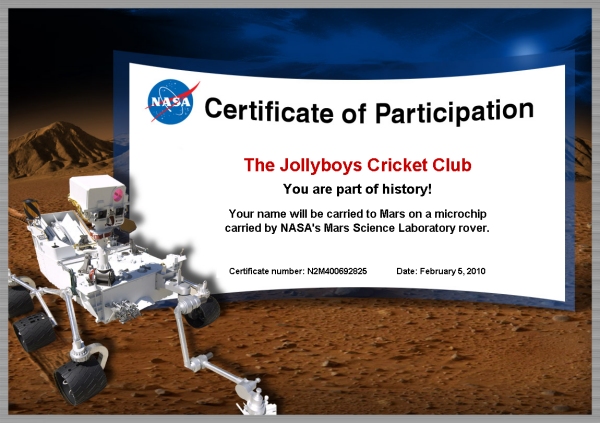 2010/01/31 Having drunk the contents of the medicine cabinet xxxxxxxxxxx racoon !